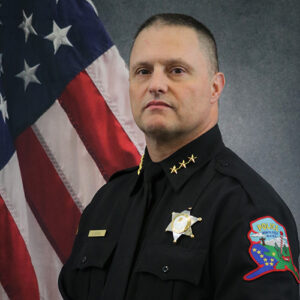 In 2007, he earned his Bachelor’s Degree in Criminal Justice with a minor in Communications from the University of Alaska Fairbanks.  He is actively involved with the North Pole Community in many ways some of these activities include the Guys Read Program, Coffee with a Cop, Cocoa with the Kids, and leading the drive to bring ALICE to our schools and community.

Since being appointed to the board of directors for AACOP in 2015, he has been actively involved in a wide variety of issues facing law enforcement within the State of Alaska. In 2018 he was appointed to the position of Secretary. In 2020 he was voted in as President.  In 2018, he was also appointed to the Alaska Police Standards Board of Directors where he currently serves.