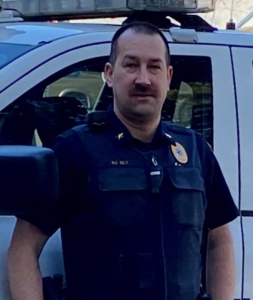 RJ Ely began his law enforcement career in 1991, working for the Hoonah Police Department and attending the Alaska Public Safety Academy in Sitka, graduating in December 1991.

RJ left Southeast Alaska, 1992 and worked out in the Aleutians for several years; St. Paul Island Police Department and King Cove Department. RJ served as a Lieutenant in Bethel and then ended up in Skagway for five years. After Skagway, RJ ended up on POW (Prince of Wales Island), worked for a short time with Klawock Police Department, before moving to Craig Police Department. While with Craig, served as an officer, Sergeant and for the last 11 years as Chief.